The Business Journal recently released its top 100 commercial real estate (CRE) executives who are also influencers in their community. Live Oak Contracting’s President and CEO, Paul Bertozzi, has been recognized among this select group of leaders as a direct result of his company’s positive impact on the commercial real estate market.

Utilizing its network of over 40 publications, The American City Business Journals turned to its extensive team of staff writers and editors in their respective cities to qualify these large and small businesses and highlight their positive successes. These professionals identified the executives that through leadership and entrepreneurship have become a resource to those who desire to grow their businesses or expand into new markets.

“It’s an honor to be recognized among the Top 100 in the CRE industry. This recognition is a testament to all the hard work of the entire team.” Paul Bertozzi stated.

In addition to multifamily construction, Paul and his team have vast experience in mixed use, tax credit, HUD, industrial, and market rate projects. Over the past four years, Mr. Bertozzi has led Live Oak Contracting in completing over $200 million in projects. For 2018 alone, the company is projected to have an estimated $150 million in contracts for the year.

In 2017, The Jacksonville Business Journal recognized Mr. Bertozzi as one of the city’s rising leaders under the age of 40 by placing him on their annual 40 Under 40 list. The company saw a growth rate of 756% over a period of three years, earning its ranking as the second-fastest growing company in Jacksonville. 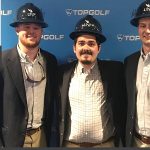 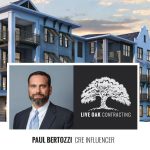