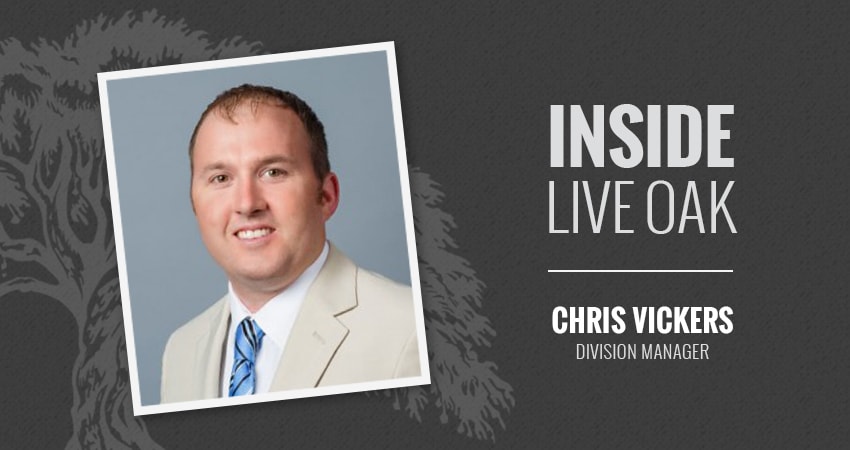 To give you an inside look at our team, we sat down with Division Manager Chris Vickers to talk about his job and the construction industry.

Tell us a little about yourself and how you got into the construction industry.

To be honest, originally, I wasn’t interested in construction at all. I played sports in high school and was more interested in the opportunities the United States Marine Corps had to offer.  I decided I wanted to be a Marine and 11 days after I graduated from Mandarin High School I left for Parris Island, South Carolina. There I became a machine gunner in the infantry and served my country for 4 years. After I left the Marine Corps in 2004 I wanted to become a cop at JSO and needed a job while I was in school. A friend of mine got me a job at D.R.  Horton as an Assistant Superintendent where at first, I was sweeping out garages and helping guys punch out houses. Ultimately, I decided I liked working in construction and was good at it so, instead of becoming a cop I pursued a career in the construction industry.

What’s your background and experience?

After working as an Assistant Superintendent at D. R. Horton, I wanted to pursue a management position in construction so I took a job as a Superintendent at Lennar homes where I was introduced to the multifamily construction industry. After gaining more experience as a superintendent I was offered my first Project Manager position with Dream Finders Homes. At Dream Finders, I took on more responsibility including training all the interns and new hires. During this time, I created a training manual for the company and eventually had an entire team working for me. I truly believe that all those experiences combined gave me the knowledge I needed to be successful at my position at Live Oak.

What brought you to the multi-family focus?

Lennar Homes was my first introduction to multifamily construction as well as my first job as a Superintendent. While I was at Lennar, I was fortunate enough to have a supervisor that took me under his wing which propelled my career to the next level.  This individual was and is my mentor Paul Bertozzi. Paul was the first person who saw potential in me and pushed me to be better. A lot of people in your career will tell you to do something just so they don’t have to do it or advise you to just do the bare minimum to get something done but Paul actually cared. He challenged me to take ownership of my work and my position.  That was twelve years ago and I am still doing it today!

Congratulations on your promotion from Senior Project Manager to Division Manager. What would you say prepared you the most for your new role at Live Oak and what do you plan to accomplish in the future?

I think the discipline I learned in the Marines combined with my experience in the construction field has prepared me to handle just about anything. I’m very competitive so I love to win. I refuse to fail and the same rules apply to this job.  I look forward to utilizing my talents and growing in the company. There is no ceiling that I don’t want to crack. I plan on taking on as much responsibility as anyone wants to give me and accomplishing every goal. I foresee having to do a lot of training so my prior background in construction education should come in handy.

What would you say sets Live Oak Contracting apart from other places you’ve worked?

Well first off, Paul is a big factor. Having an owner who has been in your position, is hands-on, easy to talk to, and not too corporate makes a huge difference. From the very first time I ever picked up a broom and was sweeping out garages, I would see the president of the company or the Director of Construction and say to myself “I want to be there one day. How do I get to that point,”? So, for me, growth and advancement are very important and the company culture at Live Oak definitely reflects those values. Everyone feeds off of each other. The sky is the limit and that creates a very productive atmosphere.

How would your past and current co-workers describe you?

Passionate. Organized. Hard worker. I consider myself more of a leader as opposed to a boss. A boss will stand there and point at you whereas a leader will lead by example and give you the tools you need to improve. I think I learned a lot of leadership qualities from the Marine Corps because sometimes you don’t have a choice but to step up. I think a lot of employees under me would say that I care about them. I always try to look out for my team.

What industry challenges are you experiencing if any? How do you overcome those challenges?

In this industry there is a multitude of challenges daily. Construction is chaos and you can either control the chaos or you can let the chaos control you. When things don’t go my way, I let it fire me up a bit then I re-adjust my focus to not making that mistake again and finding a solution.  The better you can control the chaos and manage it from start to finish the faster it’s going to propel you as far as you can go in your career.

What is one thing nobody knows about you? Everybody knows you’re a huge Georgia Bulldog fan but tell us a little more.

I teach children’s church on Sunday’s which is something I take great pride in doing.

There’s also a Vickers Street in Atlanta named after my grandfather who was a politician.