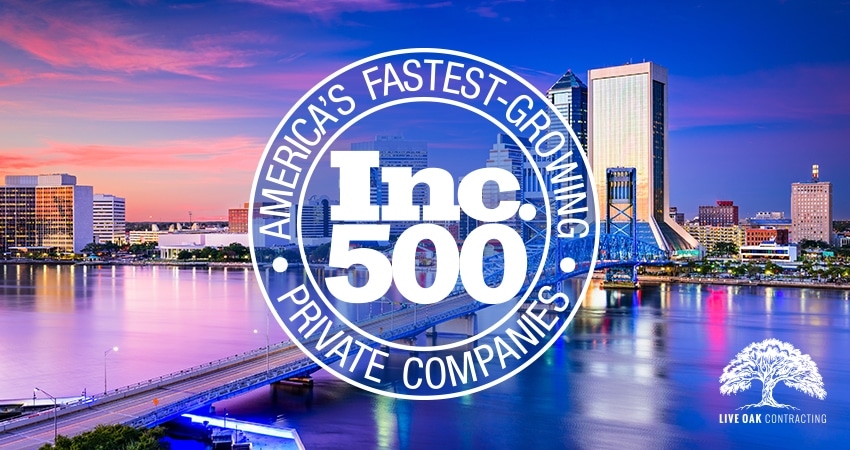 Jacksonville, FL/August 17, 2018 – Inc. magazine announced earlier this week the 37th annual Inc. 5000 list, the most prestigious ranking of the nation’s fastest-growing private companies. The list represents a unique look at the most successful companies within the American economy’s most dynamic segment— its independent small and midsized businesses.

Companies such as Microsoft, Dell, Domino’s Pizza, Pandora, Timberland, LinkedIn, Yelp, Zillow, and many other well-known names gained their first national exposure as honorees of the Inc. 5000. Live Oak Contracting was recognized as the 34th fastest-growing private company overall, and the number one fastest growing company in the construction category.

“There is not one person at this company that has made us successful; It is a team effort from start to finish that has contributed to the success at Live Oak,” Live Oak President and CEO Paul Bertozzi said.

The top 500 companies will be featured in the September issue of Inc. Not only have the companies on the 2018 Inc. 5000 been very competitive within their markets, but the list as a whole shows staggering growth compared with prior lists. The 2018 Inc. 5000 achieved an astounding three-year average growth of 538.2 percent, and a median rate of 171.8 percent. The Inc. 5000’s aggregate revenue was $206.1 billion in 2017, accounting for 664,095 jobs over the past three years.

The annual Inc. 5000 event honoring the companies on the list will be held October 17- 19, 2018, at the JW Marriott San Antonio Hill Country Resort, in San Antonio, Texas. As always, speakers include some of the greatest innovators and business leaders of our generation.

About Inc. and the Inc. 5000 Methodology

The 2018 Inc. 5000 is ranked according to percentage revenue growth when comparing 2014 and 2017. To qualify, companies must have been founded and generating revenue by March 31, 2014. They had to be U.S.-based, privately held, for profit, and independent—not subsidiaries or divisions of other companies—as of December 31, 2017. (Since then, a number of companies on the list have gone public or been acquired.) The minimum revenue required for 2014 is $100,000; the minimum for 2017 is $2 million. As always, Inc. reserves the right to decline applicants for subjective reasons.

Founded in 1979 and acquired in 2005 by Mansueto Ventures, Inc. is the only major brand dedicated exclusively to owners and managers of growing private companies, with the aim to deliver real solutions for today’s innovative company builders. Winner of the National Magazine Award for General Excellence in both 2014 and 2012. Total monthly audience reach for the brand has grown significantly from 2,000,000 in 2010 to over 18,000,000 today.  For more information, visit www.inc.com.

The Inc. 5000 is a list of the fastest-growing private companies in the nation. Started in 1982, this prestigious list of the nation’s most successful private companies has become the hallmark of entrepreneurial success. The Inc. 5000 Conference & Awards Ceremony is an annual event that celebrates their remarkable achievements. The event also offers informative workshops, celebrated keynote speakers, and evening functions.

For more information on Inc. and the Inc. 5000 Conference, visit http://conference.inc.com/.